You’ve probably heard about ASUS’s ROG brand. The abbreviation stands for “Republic of Gamers”, and marks those pieces of hardware that ASUS deems to be the best for gaming, overclocking, and eSports. When we combine this brand name with the new AM4 platform, we get a model that has already been proclaimed as the flagship of all ASUS motherboards. The new Crosshair VI Hero sports a great power delivery system, all the necessary ports, as well the attractive RGB lighting. Let’s go over the specs and main features of this popular model!

Top Features of this ASUS AM4 Motherboard

This Motherboard comes in a packaging that’s typical for the ROG products, featuring the famous combination of black and red colors. There are a number of useful accessories here – a Q-connector block, an extension cable for the RGB LEDs, an M.2 screw, four SATA cables, the SLI Bridge, and the rear IO shield. There’s also the usual documentation, as well as the sheet of stickers with ROG logos.

When it comes to the look of the motherboard itself, we have only words of praise. It’s formed with a gray and black color scheme that looks very neutral. This allows the users to more easily match the motherboard with the other PC components. Of course, the onboard LEDs will enable you to add some color to the whole build.

Memory wise, the Crosshair VI Hero allows you to place four sticks of DDR4 RAM into its DIMM slots (single-latch). You can expand it up to 64GB, which is the usual case in this price category. The manufacturer quotes support for the standard 3200MHz memory through the overclocking. Unfortunately, this is currently only possible with some memory kits, as the whole AM4 platform is still in its infancy. 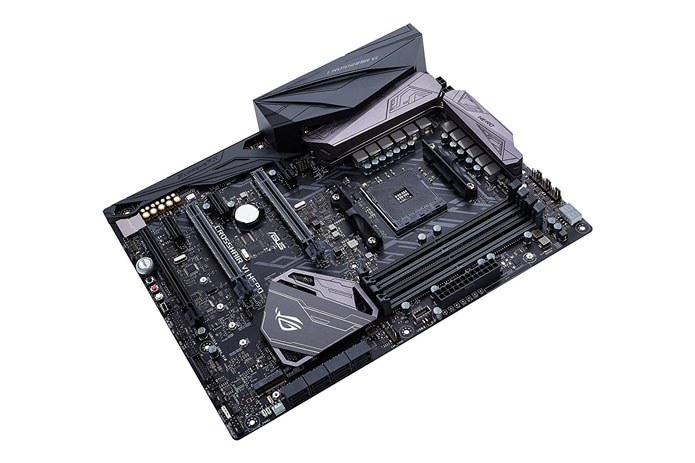 There’s a total of 12 delivery phases, and they’re split between the SOC (4) and CPU (8) voltage duties. The manufacturer uses an ASP1405I PWM controller to manage the 12 MOSFETs, 6 IR3599 phase doublers, and 12 Rectifiers IR3535M drivers. The memory, on the other hand, is administered by the ASP1103 controller.

The eight SATA 6Gbps ports that are present on this model are provided by the “Promontory” X370 chipset. Every single one of these ports can be used anytime. Sadly, there is no U.2 port here, but ASUS makes up for that with a whole abundance of USB ports on the IO part. Eight 5Gbps 3.0 ports are something we don’t see very often – it’s a huge plus in our book. There are also four 2.0 ports and two 3.1 ports, as well as the Gigabit Ethernet (provided by Intel’s I211AT NIC).

The PCI-Express 3.0 slot houses drives that are up to 110mm long, and also handles M.2 SSDs (SATA-based). The mounting location allows the single-GPU users to install the M.2-to-U.2 adapter, which they will be able to use without interference.

On the audio side, it uses the so-called S1220 codec, combined with an ESS ES9023P DAC and the Nichicon audio capacitors. Software such as Sonic Studio III and Sonic Radar III are supported.

The UEFI of this AM4 motherboard is something we’re quite used to – it’s very similar to that of the manufacturer’s other models. The default entry page is called “Ez Mode,” allowing the user to easily control the basic settings related to boot devices and fan speeds.

What’s Wrong With it?

When compared to other competing motherboards, the ASUS ROG Crosshair VI has minimal onboard RGB LED lighting. Also, we would like to see some additional UEFI features. The UEFI is clean and straightforward, but lacks some advanced options – like the option to control the AURA RGB LED.

If you intend to purchase a Ryzen processor, the Crosshair VI is a good choice for the motherboard. It will allow AMD’s powerful new CPU to show its power, but also comes with numerous features which are something we expected from ASUS. The model is also an excellent choice for overclockers, but also for the people who don’t like messing with these things and just want a good performance out of the box. In our opinion, the Crosshair VI Hero is certainly a model worth considering for purchase.

Best Portable (Travel) Monitor You Can Buy in 2021