The Ryzen CPUs have been out for quite some time now, and the things are going well – especially in the overclocking and multicore performance departments. However, there’s something else that’s equally as important, and it depends on what you want to use your rig for. Once you’ve chosen your CPU you should pick a pick a AM4 motherboard that best fits your needs.

The new socket that support the Ryzen processors is called the AM4, with X370 and B350 models currently being the most popular ones. What’s the difference between them? Join us, and let’s find out the answer together!

The Ryzen CPUs are using the new AM4 socket, which replaces the old AM3+ one. This predecessor had 942 pins, while the AM4 socket has 1,331 of them. One of the things that make these two versions incompatible is the cooler – the AM4 has different dimensions, and you can’t use the coolers of the previous generation.

However, some manufacturers provide free adapter kits, as well as AM3 mounting holes. This means that you may not have to purchase a new cooler if you’re planning to buy a Ryzen processor.

A lot of modern processors support PCI-Express and DDR4 directly via the chip, but AMD decided to manufacture Ryzen in such a way that it adds bandwidth for 4 PCI-Express 3.0 lanes and 4 USB Gen-1 3.1 ports. These can be used for either two SATA drives or a single M.2 NVME SSD. 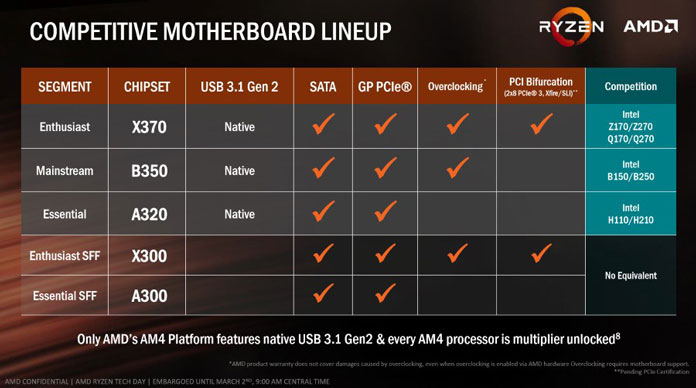 This is the flagship of the new AM4 motherboards, and one often used for demonstration purposes. This chipset has support for multi-GPU configurations and overclocking, as well as the most combined SATA ports and USB lanes.

One thing to keep in mind – while you’re looking at the abilities of these chipsets, remember that the total number will be combined with the processor’s capabilities. So, while the X370 supports six 2.0 ports, six 3.0 ports, and two 3.1 (Gen-2) ports, the Ryzen 7 chips come with support for additional four 3.1 (Gen-2) ports. This means that you can have a total of twelve 3.0 USB ports!

And once AMD decides to release more AM4 capable CPUs in future (like A-series or Athlon), one will have to combine their out-of-the-box USB support with that of the motherboard to know their full capability.

And on top of these capabilities, some motherboard manufacturers will also add some of their own features. For example, the MSI X370 Xpower Gaming Titanium comes with two M.2 slots, reinforced PCI-Express and DDR4 slots, and some extra pin connectors that provide extra energy for overclocking graphics cards and CPUs.

The X370 chipsets are for those who want the newest technologies in their rigs – they’re the high-end choice. We should also mention the bonus of receiving the BIOS updates much faster than the other models (BIOS updates will be essential to improving the performance of your Ryzen processor).

The B350 chipset wears the silver medal – it’s second in overall power when compared to X370. This chipset supports overclocking, but not Multi-GPU, as it has just a single PCI-Express configuration. It also loses four USB 3.0 ports, two PCI-Express lanes, and two SATA3 lanes.

But the things that it’s left with will surely be more than enough for an average gamer, and even for the budget overclockers. The B350 chipsets are a sweet spot for those gaming enthusiasts who are happy with their single-GPU setups.

We have to mention that we’ve seen some reports of particular B350 motherboards that allow CrossFire multi-GPUs, but that definitely isn’t something you should count on. AMD even released a statement that says that only the X300 and X370 chipsets support two cards at once and that multi-GPUs used on different AM4 sockets won’t be officially supported.

So, there you have it. Hopefully, this article will make the task of selecting the motherboard for your Ryzen build a little bit easier. If you’re a gaming enthusiast and have the money, you should definitely go for the X370 chipset, as it allows multiple graphics cards and has better overclocking results.

If your budget isn’t that big, purchasing the B350 chipset won’t turn out as a mistake – it’s not as powerful as the X370, but still offers a satisfying performance that will fit a majority of users.