In November 2016, Qualcomm announced that their flagship SOC for 2017 will be called Snapdragon 835. We were expecting a significant bump in computing performance as well in graphics. So far Qualcomm managed to match our expectations, at least on paper. We won’t know how it performs in practice until we test it in hand. But here’s what we know.

Snapdragon 835 returns to octa-core design like its predecessor Snapdragon 810 which was infamous for its overheating issues. The biggest difference this year around is the Kryo 280 CPU architecture. What all this means is that there are 4 “High Performance” cores and 4 “Efficiency” cores and both ot them are using Kryo 280 CPU architecture but wary in clock speeds from 2.45GHz to 1.9GHz. 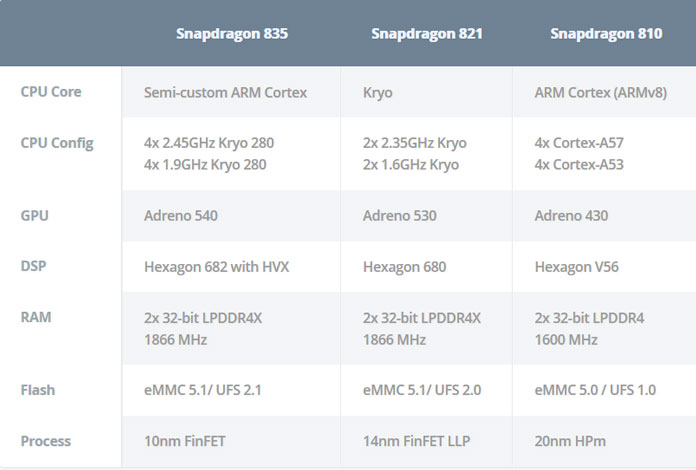 Qualcomm said that they aim to do 80% of the phone’s computing using the low powered of “Efficiency” cores which has great potential to significantly improve battery life.

Efficiency plays a big role, and the company said that power users should see 2.5 hours’ extra battery life over the Snapdragon 820. How much efficient this chip is speaks the fact that it consumes 50% less than the Snapdragon 801. Taking everything into consideration the move from 14nm to 10nm production process improved the efficiency between these two architectures by whopping 40%.

On the graphics department, we don’t see a major upgrade as Adreno 540 featured in Snapdragon 835 shares the same architecture as Adreno 540 of yesteryear but features many improvements. Such as 10bit colors jumping from 16.8 to 107.4 million colors. This is god because it opens the doors for OEM’s to potentially include HDR displays. Also, the display processing unit (DPU) features 10bit colors up to 4k at 60FPS.

These only a few of the features that SD 835 has. Obviously, there is a lot to be excited about as we are waiting for the first device that will feature Qualcomm’s latest and greatest SOC.