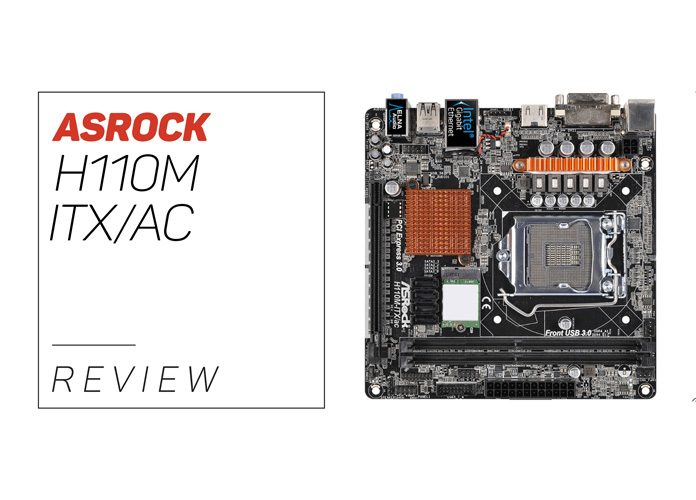 Originally spun off from Asus, the ASRock was founded in 2002 with the purpose of competing with various companies in the OEM market. Nowadays, this is one of the most well-known companies when it comes to PC motherboards – their models are still highly praised by both users and professional critics.

That’s precisely why we’re always glad to have their products on a review – this time we’ll be taking a closer look at their H110M-ITX/AC mini-ITX motherboard. It’s a reasonably-priced model that offers good performance and some premium-tier features, so let’s see if it’s worth considering for purchase.

Features of the ASRock H110M-ITX/AC

Even though this is one of the most affordable mini-ITX motherboards on today’s market, the H110M-ITX/AC sports a pretty good build. The best thing about its construction is, actually, the anti-moisture protection. Excessive humidity in the air can be lethal to a motherboard, which is precisely why the guys and girls at ASRock decided to reduce the openings between the model’s PCB layers and thus prevent possible issues caused by moisture. The official name of this solution is the “High-Density Glass Fabric PCB Design,” and it’s something we’d like to see on all other upcoming ITX motherboards.

Besides this praiseworthy build-quality, the model is packed with a plethora of useful features. It sports a dual-stack MOSFET with a larger die area that makes the power supply for the processor’s Vcore far more efficient. There’s also the next generation digital PWM design whose purpose is to enhance the motherboard’s lifespan and stability by providing a smoother CPU Vcore voltage.

The same could be said for the capacitors on this model, as well as for the ELNA audio caps that prove that it’s not just the high-end motherboards that can feature high-quality audio. Furthermore, these caps are capable to greatly reduce the noise level, which is sure to be appealing to the gaming enthusiasts.

We also liked the BIOS interface – the UEFI EZ mode is something that deserves special praise. It’s easy to read and provides multiple readings of your rig’s current status, such as CPU and RAM speed, SATA information, and so on.

Those looking for a mini-ITX motherboard for their budget build will find the ASRock H110M-ITX/AC to be a very tempting offer – it offers a lot for its low price. It’s a sturdy, well-designed model with anti-moisture protection that works just as advertised, and an excellent choice for your budget on-the-road gaming machine.

We were quite pleased with its dual-stack MOSFET feature, the audio quality that it provides, and with its easy-to-use UEFI interface. It even has Wi-Fi! It’s an outstanding small form factor motherboard that we gladly recommend to our readers.