When it comes to motherboards, the AM4 models are what everyone is talking about. Like with all other PC components, there are cheap and not-so-cheap motherboards – today, we’re going to take a look at one of the more affordable models, the ASRock AB350 GAMING K4 FATAL1TY. This board targets the gamers with lower budgets, as it doesn’t have a multi GPU-capability but still offers some really interesting features. Let’s find out if this thing is worth your money!

Like many other products of the FATAL1TY line, this motherboard also ships in a glossy box that features a combination of red and black colors. The thing that reveals that this is a budget model is the number of included accessories – there are not so many of them. Along the motherboard, you’re only getting a basic IO shield and two SATA cables, as well as the documentation and a case sticker.

The motherboard itself also combines red and black, which has always been a proven formula when it comes to the gaming market. The model uses steel plating to strengthen the primary PCIe slot. A red LED lighting can be found under the heatsink, and you can control it via the OS software – but not change its color. The 4-pin RGB headers are positioned in the board’s upper-right corner.

When it comes to RAM, the ASRock AB350 features four DIMM slots that are compatible with the dual channel DDR4 sticks. You can expand it up to 64GB, which is pretty generous in this price category. The manufacturer claims that the memory frequency support stands at 3200MHz+ via the overclocking process.

The power delivery system is managed by an Intersil ISL95712 PWM, which is assisted by two drivers for the SOC components and one for the CPU components. The six phases of the CPU are made out of M4336 MOSFET and SM4337’s – the model uses them to spread the CPU’s load across all elements. This will also contribute to better handling of Ryzen’s eight cores. 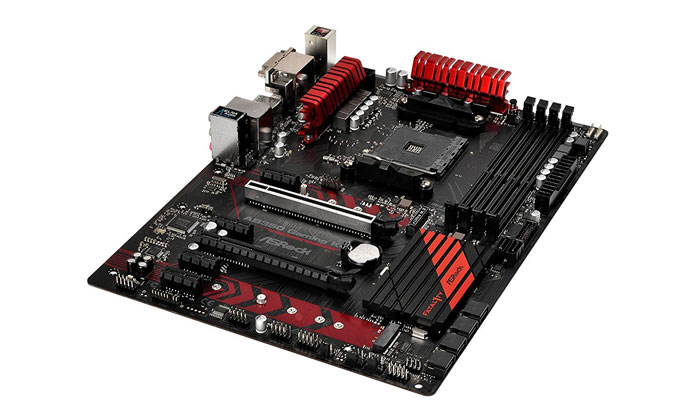 The heatsink solution of this model is quite decent, although it looks a bit small. The lack of size is, fortunately, made up by the intelligent design that’s very effective and should keep the board cool and at reasonable temperature levels. We didn’t like the push-pin mounting approach, as it causes a limited appliance of pressure to FETs which has an adverse effect on the cooling performance.

The ASRock AB350 comes with six SATA 6Gbps ports, with four of these routing from the B350 chipset and two being powered by the ASM1061 chipset. The model mixes them together when it comes to color and mounting location. There’s no U.2 on this model, but there’s a USB 3.0 (5Gbps) header sitting on the right edge. There are also two M.2 slots, which is pretty surprising for a board in this price segment.

The PCIe slot is steel-reinforced and fed by Gen-3 lanes (16 of them) directly from the CPU, and dedicated to your graphics card. Unfortunately, there’s no SLI support here, but you can use CrossFire if you’re willing to risk your second card’s performance due to the restrictive bandwidth that will be sent to it.

The audio solution of this motherboard is based on Realtek’s ALC892, which is a bit old but still quite cost-effective.

What’s wrong with it?

We didn’t like the fact that the overclocking performance of this model is restricted by the limiting UEFI options and the poor voltage accuracy. Also, some users probably won’t be happy with the lack of a 10Gbps 3.1 Second Generation port, even though this is a budget model.

Pros and Cons of the ASRock AB350 GAMING K4 FATAL1TY

For the price that it comes at, the ASRock AB350 is an excellent option. We really liked the fact that this board comes with some features that are quite uncommon in this price segment – like the secondary PCI-Express slot and two M.2 connectors. It faces fierce competition from the Tomahawk model (made by MSI) but still presents a good choice if you’d like to save some money. If the restrictive overclocking performance isn’t something you really care about, go for this motherboard – you won’t regret it.