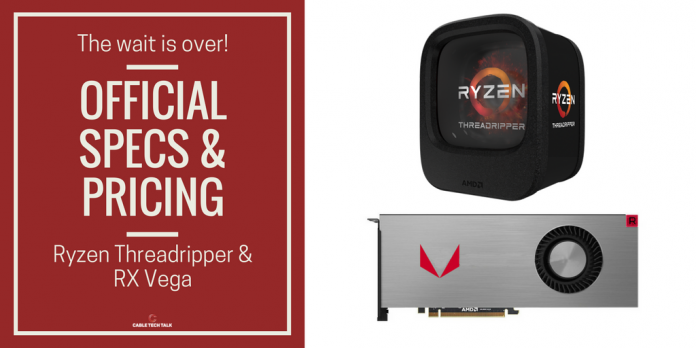 Yesterday AMD Announced final details & pricing on their new CPU and GPU platforms.
We knew about AMD’s high-end desktop processors named Threadripper for quite some time now. It all started at Computex where we were able to see a few of X399 motherboards that looked stunning to say the least with their large TR4 socket.

The main thing that these CPU’s have in common their native support for 64 PCIe lanes which was previously unheard of on a desktop platform. Also, they have support for quad-channel DDR4 memory.

Couple days ago we had a chance to see the Threadripper packaging, and many of us were hoping that it will include the rumored liquid cooler, but that’s not the case. On the flip side inside the box, AMD will be including an Asatek bracket that will accommodate most of AIO liquid coolers on the market.

The primary targeted audience for these processors are creative professionals and developers that use heavy multithreaded applications. And one of the main selling points for these CPU’s is their price to performance ratio compared to Intel’s offerings.
One thing is for sure, AMD brought back the much-needed competition to CPU market this year with their Ryzen line of processors. Their future seems bright but let’s not forget that Intel’s response to Ryzen called Coffee Lake is just around the corner.

The video card that AMD teased for the better part of the year finally got announced. At last, we have the official specs for both versions of the silicon so what are the differences between these two cards?

The table above shows how both of these cards compare to each other as well to AMD’s last generation of video cards.

We can see that the main difference between these two cards are the Compute Units (CUs) by which these cards got their names from (64 & 56). A similarity that’s very welcome is that both of these cards feature 8GB of HBM2 memory.

One new thing that AMD added to their Vega Launch are the Radeon Packs.

There are three different packs that you get to choose from based on the flavor of the Vega64 that you chose. Basically, you will need to pay $100 on the top of the card that you wanted to buy, and for that, you will receive two video games for free, $100 off a Ryzen 7 & X370 motherboard combo and $200 off a Samsung 34inch ultra-wide monitor.

By creating these packs, AMD wanted to make sure that gamers bought their cards rather than miners. Although their heart was in the right place, these packs don’t make sense unless you needed to buy those components anyway. RX Vega is expected to hit the retailers shelves on August 14th.