Cooling hardware down to reasonable temperatures while it’s under heavy load is undeniably good for both performance improvements and lifespan of the said hardware. Most people who purchase a new CPU usually don’t think about getting an aftermarket cooler for several reasons. One of which is because they simply don’t plan on pushing their hardware over its limits.

If you’re one of those people who aren’t interested in investing in proprietary coolers, you’ve probably wondered which stock cooler is considered to be the best on the market nowadays. AMD’s Wraith Prism might be a good candidate for that title.

AMD regards their new cooler as the next generation of thermal solutions. Now, that might be a bit of an overstatement, but there’s definitely some truth to it. The Wraith Prism is the default cooler that comes with Ryzen’s 2nd generation of processors, more precisely, it’s included with the Ryzen 7 2700X.

The first thing people notice about this particular component is the noise, or rather, lack thereof. Rated at only about 37dBA this cooler is one of the quietest stock coolers around. This may seem irrelevant to some people because the differences in ratings between this and many other ones aren’t as major as one would expect, but the difference is quite significant and noticeable nonetheless. 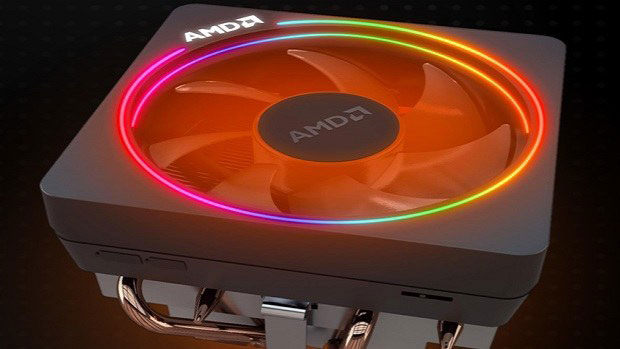 RGB lighting is also one of the essential factors that separate the Wraith Prism from other stock coolers. It features an independent RGB ring as well as LED-illuminated fan blades. While this is done purely for aesthetic reasons, it’s still worth mentioning, especially if you’re an RGB enthusiast (who isn’t?) In case you aren’t too happy about the existence of RGB, you can simply turn it off.

Direct-contact heat pipes seem more like a gimmick than an improvement, but you can rest assured that they allow for far better thermal transfer in comparison to coolers that don’t utilize this particular concept. Also, the heatsink profile has been reshaped to ensure compatibility with smaller form factor boards. The cooler features switchable overclock fan profiles which allow you to tweak the speeds according to your own preferences.

As far as installation goes, it’s pretty straightforward, even though it might seem as complicated at first glance. Basically, if you ever had to install a CPU cooler and have done it successfully, this one shouldn’t pose an issue at all. On the other hand, if you have no experience whatsoever, the included instructions are pretty comprehensive and easy to get the hang of.

Those of you who are concerned about the design and interference with other components on your AM4 motherboard(such as tall RAM sticks) have nothing to worry about as it’s quite compact and doesn’t stand in the way of other stuff in your machine. In simpler words, you don’t have to worry about compatibility thanks to the compact dimensions.

Check out this video made by JayzTwoCents if you’re interested in overclocking with this model:

We can’t wrap up the overview without making a head-to-head comparison between AMD’s Wraith Prism and Intel’s stock cooler. If you’re interested in seeing the shortest verdict possible – AMD puts Intel to shame with their cooler; it’s as simple as that.

However, by conducting deeper analysis, we can conclude that AMD’s cooler is superior in both thermal properties and aesthetics. As far as the aesthetics go, the superiority is pretty obvious thanks to the customizable RGB profiles as well as illuminated fan blades. As for the thermals, the direct-contact heat pipes definitely yield better results than Intel’s solution, but the difference isn’t as fundamental as one would expect.

The most important thing that separates these two coolers is their ability to cope with overclocking. Once again, AMD has done a great job when it comes to the cooler’s ability to keep the CPU at a reasonable temperature while overclocked whereas Intel’s cooler might struggle to maintain equilibrium. On top of that, the difference in noise is massive. In other words, AMD’s Wraith Prism is significantly quieter than Intel’s stock solution.

AMD is a great company and they always manage to deliver a welcomed surprise to their loyal users. The Wraith Prism is a perfect example of how big corporations can produce a high-quality component and keep its price at a reasonable and budget-friendly level. As far as stock coolers go, we strongly believe that Wraith Prism is one of the best out there.