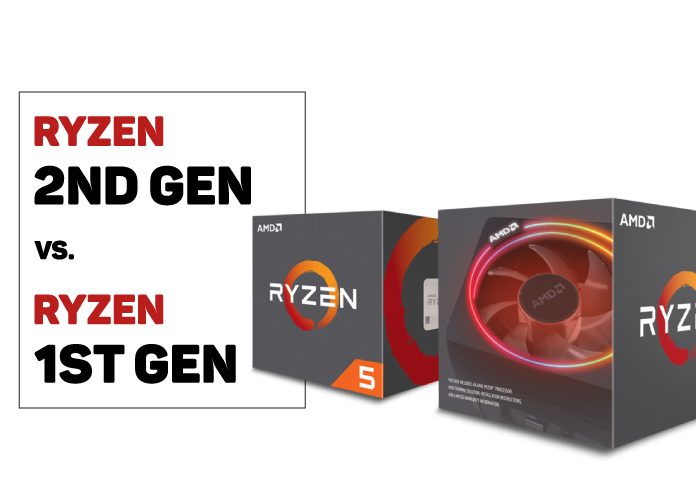 AMD released their new Ryzen line of processors back in 2017 and they have been performing quite well ever since. The main advantage of this particular line of CPUs is their capability to cope with multi-threaded tasks. Because the 1st generation was so well-accepted in the community, AMD announced a new generation of processors based on the Zen+ architecture which offers more cores as well as simultaneous multithreading (SMT).

In case you’re waging on which one to invest in, take a moment and check our in-depth comparison of both generations of Ryzen as well as the advantages and shortcomings of both 1st gen. and 2nd gen. While most people think there isn’t much to talk about here, there are still some things you should be aware of before deciding whether to go with one or the other.

When Ryzen 1st gen CPUs showed up in 2017, they were a sign of a revolution in both SMT (similar to Intel’s hyperthreading) and instructions-per-clock improvements in comparison to AMD’s previous generation. The TDP of these processors is 65W to 95W. What made Ryzen so desirable is its close performance to Intel’s Core I7 6800K and 6900K which are both significantly more expensive due to being aimed towards enthusiasts in lieu of regular users. On top of that, the aforementioned Intel’s CPUs have 6 and 8 cores respectively and draw 140W.

AMD’s precision boost uses data gathered by the Sense MI technology which allows the CPU to monitor itself accurate within milliamps, millivolts, milliwatts, and to a single degree Celsius. In other words, the innovative technology implemented in the Ryzen line allows it to tweak itself to the optimal performance one thousand times per second.

However, this would all be somewhat meaningless if it weren’t for the affordable price, which didn’t catch too many people off guard as it was expected from AMD, but it was still welcomed and appreciated. Ryzen brought competitiveness into the equation by offering a decent price while combining the high quality of production and incredible performance.

The second generation was launched in mid-April 2018. The new architecture has brought more cores and hyperthreading to the table which is why AMD is able to compete with Intel on the market. The most shocking thing about the new generation is the affordability of the new chips. In other words, the new chip offers a massive boost in comparison to other (older) architecture but is able to remain budget-friendly.

What we got with the second generation are higher boost clocks as XFR is applying to all cores and up to around 35% improvement in cache latency department which results in a 3% performance bump (claimed by AMD).   The memory support on the new X470 chipset has been bumped to 2933Mhz in comparison to X370’s 2666MHz. While this slight bump seems pretty irrelevant, a lot of benchmarks showed that it results in much better compatibility with high-speed memory kits. AMD also claims that thanks to the Zen+ architecture they have been able to offer higher clock speeds and better stability while keeping the power consumption at a reasonable level.

The differences and improvements

The first question many people ask is – “What are the differences between these two generations?” The short answer is – subtle performance improvements. While this may sound somewhat anticlimactic, the more in-depth look at these two chips reveals a much broader spectrum of differences both in gaming and synthetic benchmarks.

When it comes to gaming, there really aren’t many differences between the 1st and 2nd generation. For example, DeusEx: Mankind Divided showed an improvement of only a couple of frames per second, and the same applies to Far Cry 5. CS:GO yielded slightly better results, but most of them are pretty negligible.

On the other hand, the productivity benchmarks showed a much more dramatic swing in comparison to gaming benchmarks. For example, the Ryzen 2700X showed significantly better results than the last gen. 1800X in 7zip, Y-Cruncher, Cinebench R15, and ASUS RealBench benchmarks. Considering the fact that the Ryzen 1800X showed better performance than Intel’s Core I7 8700K, we can safely say that 8700K is greatly outperformed by the new generation of Ryzen processors as far as productivity tests go. It’s speculated that some of these improvements are directly linked to cache latency which saw a 25% jump in comparison to last gen.

Overclocking results are good, especially thanks to the auto-tweak feature which is designed to boost performance and be user-friendly at the same time. In other words, even if you never wanted to mess with overclocking because of the fear of hardware damage, you can do it safely now, and on top of that, you don’t need any previous overclocking experience whatsoever.

Power consumption is relatively decent, even though benchmarks showed that the Ryzen 7 2700X draws up to 170W under full load. That translates to higher thermal values meaning heavy overclocking is not recommended with the stock cooler as the chip can hit up to 88 degrees Celsius.

After these insights, one question remains unanswered – “Is the new generation greatly superior to the last one?”

The short answer is – Yes, it is superior, but only for certain applications. In other words, if you think you’re going to see a massive leap in performance, you’re in for an unpleasant surprise. Truth be told, the 2nd gen does perform better in every sense in comparison to the 1st gen, but the question is – Is it worth the price?

As far as we are concerned, if you already own a 1st gen chip and are satisfied with the results, there is no need to aim for an upgrade, especially if you’re an occasional user. On the other hand, in case you’re editing or rendering frequently, the 2nd generation is a much better choice due to hyperthreading, better clocks, and overall better performance in synthetic benchmarks. As for the price, AMD is well-known for being a budget-friendly company and these processors aren’t an exception.