Even though the 2nd-gen AMD Ryzen CPUs were launched earlier in this year, the company’s Ryzen 7 2800X is still nowhere to be seen. However, this doesn’t mean that it won’t be released soon – AMD’s ex general manager, Jim Anderson, stated that it would appear “someday.”

He also stated that the company’s 2700X and 2700 models have great price and performance points and that they’re sufficiently covering the space in the first wave of Pinnacle Ridge CPUs. Indeed, one could safely say that these processors make recommending Core i7 8700K, the competing models, almost impossible.

However, things are certainly about to change once Intel launches their octa-core processor in the upcoming months – its name is Intel Core i9-9900K, and it will be the company’s first mainstream 8-core/16-thread CPU. The model is expected to introduce a noticeable increase in performance and might as well become Intel’s best-selling top-of-the-line model.

The guys and girls at AMD won’t have headaches once that happens, though – they could have the brand new 2800X ready to roll out and become 9900K’s main competitor. What will it bring to the table? The word is that 2800X will be the world’s first mainstream CPU with ten cores and twenty threads, and offering speed at over 4GHz. In our opinion, this should be more than enough to keep the price reasonable but still successively counter Intel. 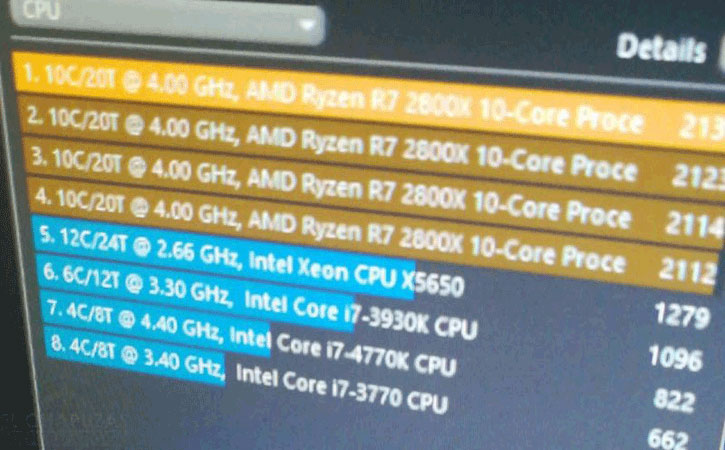 However, we advise you to take this information with a grain of salt – no one knows precisely what will the 2800X’s specifications be, as these are just rumors steaming from an already-viral Cinebench photo someone took a couple of days ago. Realistically, there’s a higher chance for Ryzen 7 2800X to be an octa-core model just like its competitor, but we’d definitely like to have AMD surprise us by going for ten cores.