With the amazing Ryzen 2000 series processors on the market, lots of PC users are searching for the right motherboard to house their brand new CPUs. Two of AMD’s latest chipsets are X470 and B450 – the first one is meant for high-end use and the second one for mid-range motherboards.

Just as expected, the most popular X470 motherboards are the entry-level ones – they compromise on certain features and aesthetics in order to sport a more reasonable price. Fortunately, they still support things like 10Gbps USB, PCI-express Gen3 lanes, and M.2 NVMe. Furthermore, the vast majority of cheap X470 motherboards utilize at least six phases on the Vcore rail, allowing the overclockers to do some modest overclocking.

The mid-range X470 motherboards, on the other hand, look a bit better and form a tier in which most companies introduce their famous brands, such as Gigabyte’s Aorus, MSI’s Gaming Pro, ASRock’s Fatal1ty, and others. All of the full-sized motherboards in this category provide two M.2 connectors and six SATA3 ports. A few models implement on-off switches for overlocking and some debugging features, while also using bigger heatsinks that allow moderate to heavy overclocking. Furthermore, most of them also provide HDMI and DisplayPort outputs.

In the segment of high-end X470 models, things like angled headers and abundant USB connections are quite common. With a high-end X470 motherboard, one can certainly expect to have support for USB 3.0 Gen2 case headers. Most models in this price range include Wi-Fi, bluetooth, 802.11ac, clear BIOS features, as well as the fantastic overclocking capabilities. Those who spend $250+ on an X470 model should expect it to come with everything they need. 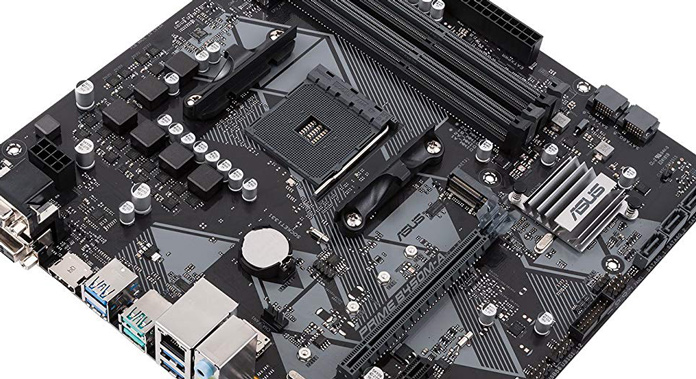 Motherboards that sport the brand new B450 chipset are now finally available, upgrading the last-gen B350 chipset with a couple of exciting features which were once exclusive to the already mentioned X4370 and X470 platforms. Supporting two or more GPUs through Crossfire and having the enhanced XFR2 overclocking feature, these motherboards are not necessarily a considerable upgrade to those who already own Ryzen systems, but could certainly serve as baselines for those who plan to build Ryzen rigs in the future.

One of the biggest features of AMD’s Zen platform is that two already-existing generations of CPUs can use the same sockets. The last-gen X370 and B350 motherboards needed a BIOS update in order to support the Ryzen 2000 series processors, but things are a little bit different with the B450 chipset. Just like the X470 platform, it supports the Zen+ processors right out of the box.

In a lot of ways, the B450 platform is a lot closer to X470 than B350 was ever to X370. It does share USB support with its predecessor, though, but in terms of SATA connections and other important features, it’s a lot more like X470. It also has an impressive overclocking support – Precision Boost Overdrive feature allows one to get the maximum possible speed while maintaining a stable performance.

Even though the B450’s features show us that AMD has improved their game and that this chipset offers features that were previously unattainable in this price category, the platform is still intended to be used by mainstream users.

If you’re a PC enthusiast who wants to get the maximum out of his brand new Ryzen system, X470 is a safer bet. If you, however, have no other choice but to cut the costs and go for B450, you won’t end up disappointed – this chipset could very well represent a change in what the most recommendable boards for Ryzen processors are.